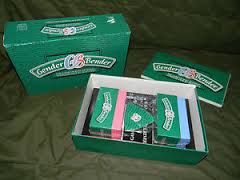 Gender Bender is an adult party game where you imagine what you would do in a given situation if you were a member of the opposite sex. If your answers consistently match the answers of the opposite sex players, you’ll probably win!

Object of the Game

The nature of Gender Bender(tm) is to reverse roles and test your ability to think like a member of the opposite sex. Gender Bender is not designed to create competition between the sexes; there is always a male and female winner. Two men and two women are the required minimum (an equal number of both works best), although there is no limit to the number of players. The game does not require a formal table and chair setting.

Players arrange themselves comfortably about the room in an alternating male-female sequence. Each player receives a Triangular Response Pick. One player is chosen to be the scorekeeper and enters the names of the players on a score card beginning with the player to his/her left.

Play begins with the person to the scorekeeper’s left. IF THIS PLAYER IS MALE, he will participate with all the women in the game, while the other men observe. His turn begins with another player reading a Suppose you were a woman… card to him. The situation and response options A, B, and C are read aloud as many times as necessary. The man, and each of the women, considers the situation and the three response options silently. The man, who is supposing he is a woman, privately selects a response that he feels will match the choice made by the majority of the women. Each woman in the game also privately selects which option she personally agrees with. When all have made their selections, they flash their Response Picks simultaneously with A, B, or C displayed. For his turn, the man will score one point for each of the women’s selections which matches his own.

Play continues to the next player on the scorecard, with the scorekeeper ending the round.

IF THE DESIGNATED PLAYER IS FEMALE, she will participate with all the men in the game, while the other women observe. Another player will read a Suppose you were a man… card to her, and so on.

There are five men and five women in the game. Anna, the current player, is supposing she is a man. She considers the situation and her choice of options silently. Each of the five men in the game does the same, while the four other women observe. When the choices are made, Anna and the men flash their Picks at the same time. She finds she has chosen the same option as three of the men; therefore, she scores three points.

A game may end after a set number of rounds or when any player reaches a set number of points. In either case, the highest scoring man and woman are declared the winners, but all will be the wiser.

Suppose you were a woman…

The most important thing a man brings to love-making is

You invited him to lunch, but now he insists on paying the bill. What do you do?

What would you surmise to be the most uncomfortable thing to wear?

Suppose you were a man…

On the beach, your girlfriend is ogling all the body-builders. What do you do?

Walking down the street behind a beautiful woman, you become physically aroused. What do you do?

You’re in an unfamiliar part of town, trying to find a place you’ve never been to before. Do you

Ladies — Suppose you were a man…

While giving a speech at the Ladies’ Garden Club, you discover your fly is open. Do you

Gentlemen — Suppose you were a woman…

What scares you most?