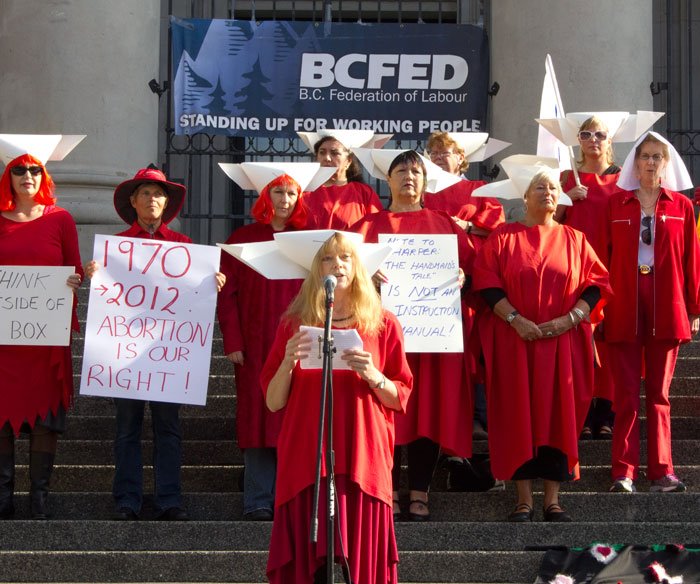 Photo: September 25, 2012 in Vancouver. Joyce Arthur speaking at rally against Motion 312, organized by Abortion Rights Coalition of Canada and BC Federation of Labour.

“Conscientious objection” in reproductive healthcare is wrong and dangerous:

What International Human Rights Groups and Agreements, and Global Health Orgs, Say About “Conscientious Objection” in Healthcare (Resource document, May 2021)

How to Reduce or Eliminate “Conscientious Objection” in Reproductive Health Care, by Joyce Arthur and Christian Fiala (Nov 2020)

The Refusal to Provide Healthcare in Canada (Oct 2020)

Lessons learnt from the past: “Conscientious objection” to abortion in Chile will lead to widespread disobedience of the new law, by Christian Fiala and Joyce Arthur (Aug 2018)

Letter to the Editor: The FSRH guideline on conscientious objection disrespects patient rights and endangers their health, by Christian Fiala and Joyce H. Arthur, BMJ Sexual and Reproductive Health (April 2018)

Letter to the Editor: Refusal to Treat Patients Does Not Work in Any Country—Even If Misleadingly Labelled “Conscientious Objection”, by Christian Fiala and Joyce H. Arthur, Health & Human Rights Journal (Sept 2017)

There is no defense for ‘Conscientious objection’ in reproductive health care, by Christian Fiala and Joyce H. Arthur, European Journal of Obstetrics & Gynecology and Reproductive Biology (July 2017)

“Conscientious objection” in reproductive healthcare is dishonourable disobedience – Presentation delivered at the IWAC conference in Bangkok Thailand on January 28, 2016 – the 3rd international conference on women’s health and unsafe abortion (PowerPoint in PDF format)

Prohibit Conscientious Objection: My Feedback to the Ontario College of Pharmacists (November 2015)

“Dishonourable disobedience” – Why refusal to treat in reproductive healthcare is not conscientious objection, by Christian Fiala and Joyce Arthur. PDF version. (March 2014)

Why Access to Abortion Remains an Election Issue, a 30 minute podcast interview by Rabble Radio (Sep 2021)

Joyce Arthur Responds to the Alliance for Life Ontario, 68 minutes, by Strong and Free Podcast. (July 2021)

The power of fake news and anti-choice lies (Aug 2018) – 34-minute podcast of presentation for  BC Humanist Society, about Canada Summer Jobs funding for anti-choice groups.

The Canada Summer Jobs kerfuffle: Full of sound and fury, signifying nothing (Feb 2018)

Moving forward with the abortion debate (May 2014)

New Brunswick invites the return of unsafe abortions (May 2014)

Nothing but contempt: Putting the lie to media coverage of Dr. Henry Morgentaler (June 2013)

The Political Is Too Personal – Why abortion is an election issue, and why it shouldn’t be. (July 2004)

The Case for Repealing Anti-Abortion Laws – A detailed argument using evidence from Canada, the only democratic country in the world with no abortion restrictions. (Jan 2009)

Repeal All Abortion Laws – A shorter blogged version of the article above. (Jun 2007)

Canada Does Not Need an Abortion Law (Oct 2008)

Death in Perspective – The annual death rate from maternal mortality is three times greater than the 2006 Indian Ocean tsunami. (Jan 2006)

Yes, Legalizing Abortion Does Save Women’s Lives – Refuting the bizarre and false anti-choice claim that legalizing abortion does not improve maternal health. (March 2010)

The fetus, and why it’s wrong to focus on it:

Behind the Fetal Tissue Scandal – No, Planned Parenthood is not selling baby parts (Oct 2015) (PowerPoint in PDF format)

Let No Fetus Defeat Us! – The heart of the abortion issue is inside the heart of a woman. When she’s pregnant, the value and fate of her fetus is completely up to her and nobody else. (April 2006)

Fetal Pain: A Red Herring in the Abortion Debate – Fetuses cannot feel pain until the third trimester, if even then,  but virtually no abortions occur at that late stage anyway. (May 2005)

The Fetus Focus Fallacy – Focusing on the fetus has dire legal and social consequences for women’s rights and dignity. (Spring 2005)

Abortion: The Ultimate Insult to Male Authority (May 2007)

Religion and Abortion – The anti-abortion viewpoint is rooted in misogynistic patriarchal religion. Abortion rights should be protected under our constitutional right to freedom of religion. (Oct 2001)

Anti-Abortionists Don’t Have a Biblical Leg to Stand On – Yes, the Bible is Pro-Choice! (Aug 2001)

Why the Christian Right Wages War Against Abortion (Sept 1998)

The Holocaust has nothing to do with abortion (April 2017)

No, you can’t be a pro-life feminist: “It’s a betrayal of women” – From: Point/Counterpoint: Can You Really Be a Pro-Life Feminist? (Jan 2017)

Anti-choice centres lose lawsuit: What does it all mean? (Sep 2013)

Why Abortion Must Be Fully Funded (Oct 2012)

Tips for Responding to the Abortion Crapavan – (sometimes called the “new abortion caravan”), by Jane Cawthorne and Joyce Arthur (June 2012)

Where is the Anti-Choice Movement Headed? – A detailed analysis of the successes and failures of the anti-choice movement in North America, with a focus on the history and role of extremism. (Summer 2003)

How to Interpret Polls on Abortion (Autumn/Winter 2002)

A Word of Advice to Anti-Choicers – If you want a chance of winning your “war” against abortion, at least “know your enemy!” (Dec 2002)  (Personal, homepage, anti-advice)

Abortion and Breast Cancer – A Forged Link – Anti-abortion zealots hurt women with their disproven claim that abortion leads to an increased risk of breast cancer. (Jan 2002)

No Virginia – Abortion is NOT Genocide (April 2000)

Hypocrisy and the Hippocratic Oath (July 1999)

The Trumpocalypse – vs. Women’s and Reproductive Rights (Dec 2016). Powerpoint in PDF format.

Paternity, Patriarchy, and Reproductive Rights – The male need to control paternity of children explains most of the oppression against women. (Dec 2006)

Abortion Books – a searchable website of hundreds of books about abortion from over 30 countries and 9 languages (pro-choice books only).

Abortion Myths – Refuting myths about abortion. The goal of this website is to to inform and support women with accurate information to help them take their decision.