Of all the species that have ever existed on Earth, about 98% are now extinct. It is thought that up to 10 million species are alive today, although only 1.5 million have been discovered. This means that as many as one billion species (or at least 150 million) have lived on the Earth at one time. Was there really enough room on Noah’s Ark for all these animals? And why is the Bible completely silent on the critical issue of extinction?

At least five major mass extinction events have occurred during the history of life on Earth, as well as numerous minor ones. Most of these events were a result of major climatic shifts and changes in sea level, and perhaps in some cases, extraterrestrial impacts. The fossil record bears the indelible mark of these successive waves of extinction, followed by proliferations of new and different life forms. Yet the book of Genesis is quite clear—all animals were created together at one time. How then do creationists explain the cycles of extinction and proliferation that we see in the geologic record? And why would the “Creator” even make species that would go extinct?

The evidence for mass extinctions, and extinction in general, is bad news for creationism. Up until the 18th and 19th centuries, theologians and natural philosophers (there weren’t really any scientists in biology) were quite opposed to the idea of extinction. Each species was thought to be a link in an unbroken chain, called the Great Chain of Being. Since the Earth and everything in it were created perfectly, the death of entire species would imply imperfection.

Indeed, when we read Genesis, we find that God specially created each species and appointed Adam their overseer. Not a single word in Genesis hints at extinction or in any way sheds light on the issue.

How can creationists account for this? The only way out, really, is for them to propose that all extinctions happened after the fall of Adam and Eve, in a world that was no longer perfect. But this wreaks havoc with the fossil record as laid down in the geological column. If all animals were created together and most became extinct over several thousand years (or even hundreds of millions of years in old-earth creationism), why don’t all animals show up together at the earliest geological level, with the number of species decreasing as time goes on? If creationism were true, this is what we would expect. But instead, the nature of the fossil record supports evolution. Simpler organisms are found at lower levels and more complex ones at higher levels, and different species of animals appear at different times. Furthermore, the total number of species living at any particular time varies. There are numerous peaks and crashes, corresponding to numerous extinction events, both minor and major. After each mass extinction, many new species begin to appear. But if these subsequent animals were specially created at the beginning of earth’s history along with all other species, where is the record of their prior existence? It seems that creationists have more serious gaps in their fossil record than evolutionists allegedly do in theirs.

Another straw that creationists might grasp at is the possibility that only a small sample of all living species made it onto the Ark, and the rest perished, all at once, in Noah’s flood. Unfortunately, this has the same problems as noted previously. There are at least five mass extinctions in the geological record, not just one. And it also doesn’t wash on Biblical grounds. In Genesis 6:19-22, God tells Noah to take every animal, not just a chosen few, and Noah does exactly what God asks. Surely creationists would not dare to contradict their Holy Creationist Textbook.

Extinction makes perfect sense in light of evolution, however. The dynamics of population growth, resource competition, adaptation, and environmental catastrophes all combine to create situations where some species are more vulnerable to extinction than others. In fact, given enough time, it happens to almost all species sooner or later, although some likely go “extinct” by way of evolving into something else. The fossil record displays a relatively clear, chronological history of extinct species. In accord with evolution, these extinct fossils start to look more and more like modern forms of life the higher one goes in the geologic column. Extinction has helped produce the sheer complexity and diversity of life that we see today, because when species die, other animals occupy the vacant niches and evolve to adapt to the new environments. Mass extinction temporarily reduces diversity, but creates opportunities for radical innovation, such as new body plans or modes of life. Without extinction, life on earth would become relatively static and unchanging. However, even creationists admit change within “kinds,” sometimes quite substantial change. But any species change at all opens the door to the possibility of extinction, even without the threat of environmental catastrophe.

To help creationists understand this issue and formulate a response, allow me to provide some historical information on how our knowledge about extinction and the geological column came about.

Up until the 18th century, the biological world was relatively unexplored. It was assumed by naturalists that unknown fossil animals still survived somewhere. Today, there are few areas left that might harbour surviving populations of extinct animals. On very rare occasions, such a population is found (such as the Coelecanth fish), but we can never expect to come across more than a handful of such examples. In 1786, Georges Cuvier, the great French paleontologist, showed for the first time that extinction must have occurred in the case of the woolly mammoth, which was too big to have gone undiscovered as a living animal.

By Cuvier’s time, some 70 years or more before Charles Darwin published The Origin of Species, the major components of the geologic column had been worked out and the essentials of fossilization were understood. 18th century geologists (creationists by default) organized strata by type of rock and observed that certain fossils were found only in particular strata. This succession of fossil types was thought to reflect different time periods separated by cataclysms and new creations. Cuvier and his contemporaries were catastrophists—they believed that the geological record was the result of great supernatural upheavals, and that the most recent of these was the biblical flood. These men clung to the biblical record as best they could, but they were forced by the evidence to posit a series of catastrophes and new creations, as well as a sufficiently old earth to accommodate them. Around that era, the Earth was thought to be anywhere from about 20,000 to 100,000 years old.

Estimating the age of the earth with more precision became possible after 1830, when Charles Lyell, an English geologist, published his Principles of Geology. Lyell argued that the past should be studied using the assumption that the natural processes we observe today operated the same way in the past, and that geologic change is slow and steady. Lyell’s work was influenced by the 1785 work of James Hutton, a Scottish geologist (Theory of the Earth with Proof and Illustrations). Hutton showed that geological processes are cyclic in nature and can bring about great changes when operating over long time intervals. Hutton’s and Lyell’s work opened up new vistas of age for the earth, and gave Darwin the time he needed for evolution to happen. However, both geologists were also creationists and Lyell, who was a friend of Darwin, remained a special creationist until his death.

Armed with these new explanatory tools, geologists could decipher and categorize the past. A stratigraphic time scale, called the Phanerozoic time scale, was developed during the 19th century. This scale was divided and sub-divided into eras, periods, and epochs, which in turn were correlated with different sedimentary layers in the geologic column. The entire sequence of sedimentary rocks is essentially complete in more than a dozen deep sedimentary basins throughout the world. This sequence, which is about 75 miles thick, shows 3.8 consecutive billion years of earth history. By estimating the rates of deposition, geologists in the late 19th century initially arrived at figures of several hundred million years for the age of the earth. It was not until the early 1900’s, with the discovery of radioactive dating methods, that scientists realized the earth had to be billions, not millions of years old. The currently accepted age of 4.5 billion years was finally arrived at in 1953.

In defiance of history, and in spite of the fact that dating of the geologic column relies on independent radiometric dating methods, not just on the presence of certain “index” fossils, modern creationists like to say that the arrangement of the geologic column is based on the assumption of evolution. The dating of fossils, they say, is based on a false assumption because fossils in rocks are used to date rocks, but at the same time, rocks are used to date fossils. One prominent creationist, Duane Gish of the Institute for Creation Research, still claims this, even though he once conceded his error in a public forum at the University of Toronto in 1982, when he was shown a geological map published in 1795 (see In the Beginning. . ., by Chris McGowan, pg. 99-100).

The accompanying table below shows the geologic time scale with era and period divisions, the major extinction events (represented by shaded bars), the primary victims of those extinctions, and some major evolutionary and glacial events (table adapted from Steven M. Stanley’s book, Extinction, page 9).

In conclusion, we ask that creationists respond to the following points:

McGowan, Chris. 1984. In the Beginning. . . A Scientist Shows Why the Creationists are Wrong. Buffalo, NY: Prometheus Books. 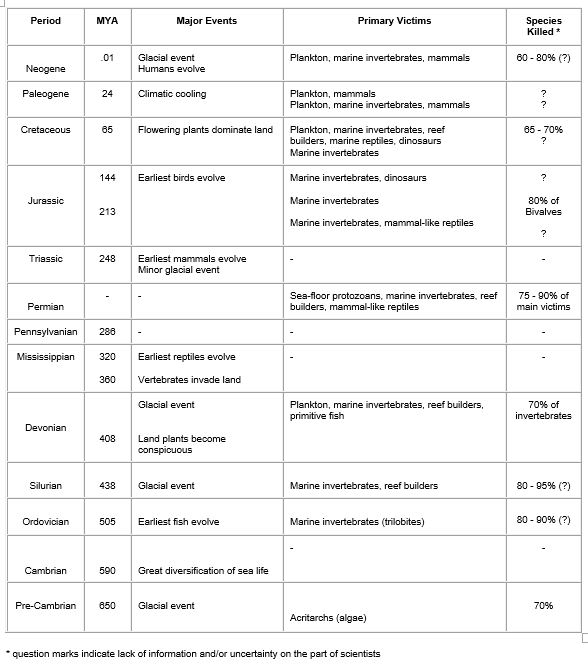